A lot has been written about cloud computing’s energy guzzling habits (including on EcoGamer). We know that cloud computing requires giant data centres filled with stacks upon stacks of power hungry computers. It’s easy to see these less as futuristic information factories and more as a blight on the landscape, and the environment.

Looking at the accompanying energy bills doesn’t do much to stymie these negative associations: data centres in the US alone used 90 billion kilowatt hours of electricity back in 2017 and it’s predicted that centres like these will account for as much as 8% of global power usage by 2030. But while these numbers are undeniably high, putting them into context can be somewhat more difficult.

A new(ish) report – covered here by the New York Times – has found that data centre energy usage hasn’t multiplied anywhere near as much as our data addiction. Increases in efficiency have meant that despite our data needs multiplying by a factor of six since 2010, the energy cost used by our data centres has scarcely increased at all.

The study claims that the dramatic increase in the use of cloud computing is a key factor in data centre operators’ drive toward efficiency. According to the report’s lead author Eric Masanet “the public thinks these massive data centres are energy bad guys” but in reality, they’re leading the way in computing efficiency.

As cloud computing hits the mainstream like never before, this news may seem reassuring. Some of the biggest names in computing (and by extension gaming) have offered up their own cloud computing services over the last few years and in the last twelve months alone, Microsoft, Google and Nvidia have all joined, or re-joined, the cloud computing revolution. This time, more than ever before, it seems like these services are here to stay.

Yet as each of these computing behemoths sets out its stall, going above and beyond to promote the high refresh rates, low costs and extreme resolutions they offer,  the environmental pitch for these products has been sorely lacking. Google is more than happy to talk about the percentage of its energy that comes from renewables (it’s 100% in case you were wondering), but information about the overall carbon cost of cloud gaming, compared to, say, firing up your ps4, is based on little more than educated guesses. You’d be forgiven for wondering why Google, Nvidia and others are keeping their cards so close to their chests.

Perhaps it’s because playing games on computers hundreds (if not thousands) of miles away from you isn’t all that energy efficient after all. Efficient data centres or not, the additional energy cost of running devices at home in addition to running computer racks off-site probably starts to add up. And that’s without taking into account the internet infrastructure that’s needed to push pixels fast enough to stop players throwing their controllers across the room.

Despite the plethora of cloud gaming services offered by every company under the sun, I’ve still got no idea if cloud gaming is the saviour of environmentally friendly gaming or its worst enemy, and that’s kind of the point. Until some of the big cloud gaming companies start making the argument for cloud gaming being an eco-alternative to games consoles, or at least the bleeding edge gaming PCs they mean to replace, it’s only natural for people to fear the worst.

The environmental cost of video games hasn’t mattered much to consumers up to now – the video games hardware industry has thus far managed to avoid tricky questions about energy efficiency – but the dramatic lifestyle changes that we’ll need to make to slow the burning of the planet will leave no room for power-hungry gaming to hide. And with major tech sites predicting that the Xbox Series X and PlayStation 5 will use more power than any mainstream console ever manufactured, environmentally conscious gamers may soon need a proper alternative.

I don’t know if cloud computing is the future of gaming, but whether games are played on home consoles or remote servers there’s no way they can rely on guzzling billions of kilowatts of only partially renewable energy for much longer. If gaming in the cloud really is more energy efficient than gaming on a console, then games companies need to start spreading the news. If they’re not, then they need to get there fast or risk ‘the future of gaming’ being left behind.

Sony is struggling to get manufacturing costs for the upcoming Playstation 5 below $450 according to new information from Bloomberg. The outlet reports that a number of particularly expensive components are responsible for pushing manufacturing costs above those of current generation consoles.

Along with typically pricey components like system memory and high-spec solid state storage, the report highlighted an unusually expensive cooling system as a factor in the $450 price tag.

While advanced cooling systems can have a range of benefits – including keeping the console quiet or helping designers reduce systems’ physical footprint – it’s likely the focus on cooling is due to the high voltages the system will require to maintain clock speeds.

A test leak earlier this year of what is assumed to be Playstation 5 hardware revealed, among other things, a graphics chip running at 2.0ghz, a speed well above most consumer graphics cards. 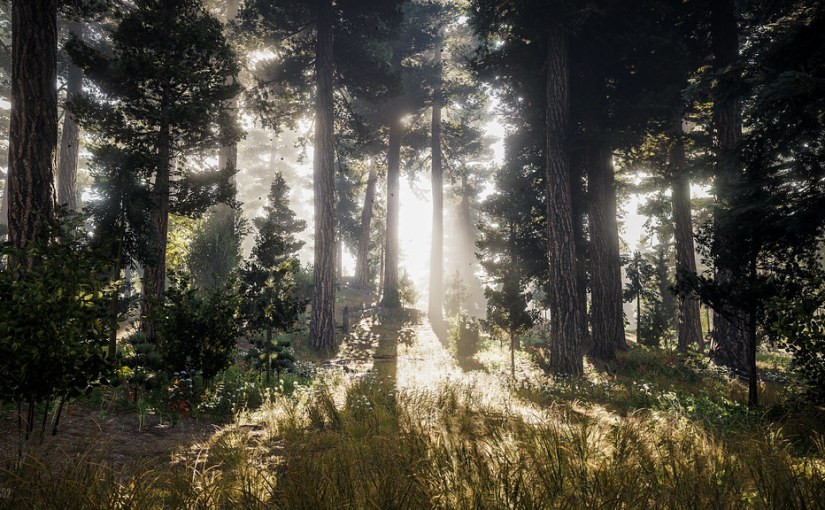 Launching a site about playing games and protecting the environment is niche, even for an industry which makes products about carefully driving lorries through realistic European roads.

Plenty of things pollute far more than video games, or so we assume. Farming, fashion and transportation are universally named and shamed as planet killers, long before video games get a name check. It’s little wonder that most people are able to keep real world annihilation out of their minds while traipsing around fictional post-apocalyptic playgrounds.

But playing games could be far more damaging to the future of our planet than you’d think. According to a study by The Computer Games Journal {Link} published at the end of last year video games are responsible for the production of 24 million metric tons of carbon emissions. And that’s before you consider the mountains of video game boxes, E.T cartridges, Blu-ray disks and Nintendo Power Gloves piling up in our landfills for the next 10,000 years.

This is the kind of stuff we worry about at EcGamer and we know it’s not just us. Climate change has got foodies changing their diets, jetsetters adapting their travel plans and fashionistas rummaging through charity shops and thrift shops to reduce their environmental impact.

It’s now our turn to take on the video games industry’s worst environmental excesses, we just need to figure out how to do it.

We’re not going to be able to provide all the answers. We’re amateur environmentalist at best and our video game tech knowledge would make Digital Foundry weep. But what we can do is pull together environmental stories which are relevant to gaming and gaming stories that have an impact on the environment in one place. We’ll intersperse these with features, how-tos and reports on our own efforts towards environmentally-friendly gaming.

Obviously this won’t do much to slow down what’s coming, but perhaps it will help one or two people get a handle on their carbon emissions, and it’ll at least get us thinking about our own.

As I write this, Australia is in the midst of recovering from bushfires that ravaged the country’s wildlife and Antarctica has just logged the hottest temperature on record. But there’s still a real danger that the world will go back to keeping climate change in the back of their minds until the next climate change catastrophe, despite the ever decreasing periods between climate change catastrophes. In times like these, the voices that don’t die down are the most important to keep the conversation going.

We think it’s vital that those responsible for the medium we love know that our voices won’t die down either. Our community isn’t ignorant of the world around us and I’m sure many of us want to be part of the solution, not the problem. 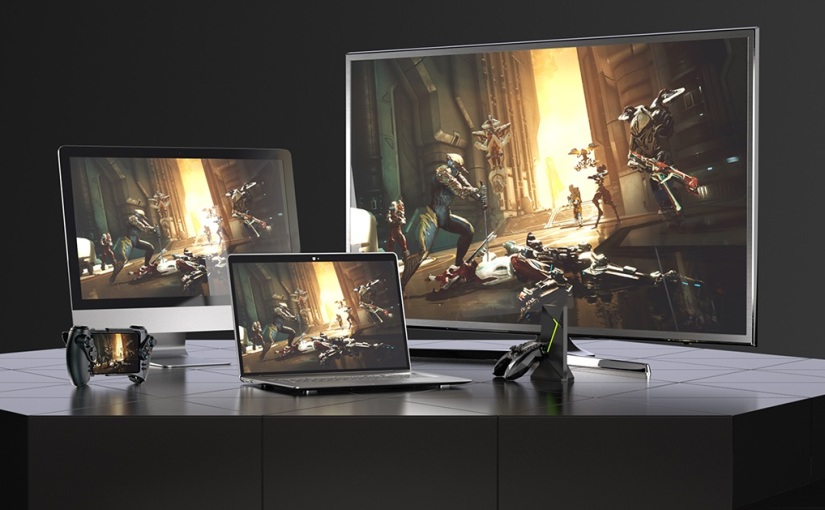 The new platform looks to offer considerably more flexibility than Stadia at a significantly lower price (for now). While Google Stadia requires users to buy games individually on their service to play, Geforce Now will plug into existing services, including Steam, for a subscription of $5 a month.

Ditching Google’s service is likely to look even more tempting to users given the lack of announcements regarding new games or features for the platform – a possible side effect of a last minute decision to double the games library at launch.

Geforce Now  has been praised by a number of outlets, predicting Nvidia’s triumph over Google in the cloud gaming space. But the announcement of more competition may not be quite so positive for CO2 levels, considering the disparity in the two companies green credentials.

While google claims to have used 100% renewable energy since 2017, Nvidia’s latest sustainability report confirms that less than half of the electricity they use comes from renewable sources.

It’s still early days for both services. Who will come out on top as market leader, and how much the cloud gaming market will eventually be worth, is still uncertain. But if Google is to appeal to anyone except the most ardent of fans, it seems like it may have some serious catching up to do.

The game developer best known for its blue, animal saving mascot is set to reaffirm its planet saving credentials by making packaging for its PC games 100% recyclable.

Sports focused Sega subsidiary Sports Interactive announced that the popular Football Manager series would be made from recycled materials back in September and the move has now been widened out to all Sega PC games including Total War: Rome II – Enemy at the Games Edition, which releases this Thursday.

The new packaging consists of recycled and recyclable paper and cardboard for the game’s box and manual wrapped in 100% recyclable low-density polyethylene. While the use of these materials increases the cost of production by 20 pence per game, Sega hopes that the costs will be made up by savings in transportation.

We’re hopeful that this new commitment to recyclable packaging will catch on among PC game developers, a similar move on console would require a significaiton deviation from Xbox, Sony and Nintendo’s strict controls on plastic game packaging.

Rob Bartholomew, Chief Product Officer at for the Total War series, said: “We’re proud that Creative Assembly is able to collaborate with SEGA on this great initiative to help reduce plastic waste and be a part of this small step towards a greener industry.”

Tech conglomerates responsible for some of the biggest players in the video game industry led a giant swing towards renewables in 2019, according to a new report by BloombergNEF.

Xbox platform owner Microsoft made the top four list too, having also invested heavily in cloud computing for its project Xcloud (currently in preview). Facebook and Amazon rounded out the list of four, both of whom are rumored to be planning to add cloud gaming to their business in the near future.

Hello, and Welcome to EcoGamer.

Hopefully you’ve made your way here because you’re just like us. Passionate about video games and yet committed to helping avoid the destruction of all life on earth.

To help bridge the gap we’ll have guides to help you be a better green gamer, news that brings you the latest in gaming from an ecological point of view, and features on the hot issues of the day or maybe just natter about our favourite video game greenery.

If this sounds like your kind of thing, then hang out, read a thing or two and maybe even subscribe.We’ll do our best to make sure our posts are of the best quality we can muster, but if there’s anything you don’t like (or we get wrong), you can email mail@ecogamer.co.uk and we’ll respond as fast as is humanly possible.

Thanks for reading, and we look forward to hearing from you very, very, creepily soon.